Roosendaal, 28 October 2019 – Belgium, the Netherlands and the Ruhr area are now directly linked to northern Italy via a fast, intermodal connection.
Jan de Rijk Intermodal B.V. and Wetron Transport & Logistics B.V. have signed an agreement with primeRail GmbH for two fast and frequent train connections to Italy. The companies will jointly operate services from Kaldenkirchen and Duisburg terminals to RHM Terminal in Melzo. The first Duisburg-Melzo service will depart on 04 January. A total of ten rotations will be completed per week.

This new service will offer both collection and delivery, essentially offering a seamless door-to-door service in both directions. Cargo from Belgium, the Netherlands and the Ruhr area will be loaded from our customers’ facilities during the day and depart by train the same evening. Shortly after the train’s arrival in Italy, freight will be delivered quickly and reliably throughout Northern Italy.

Fred Westdijk – CEO Jan de Rijk Logistics: “Our new services will operate in excess of 470 rotations in 2020, resulting in approximately 17 million kilometers being moved from road to track. This reliable and cost-effective solution will result in a significant CO2 reduction, thereby meeting our customers’ fast-growing demand for sustainability”.

Each train has space for a total of 32 containers/ trailers and comprises the following configuration: 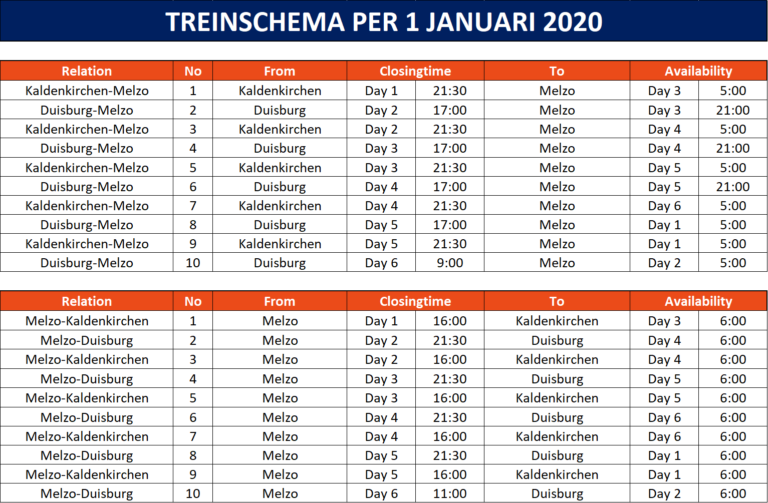 For more questions about intermodal transport